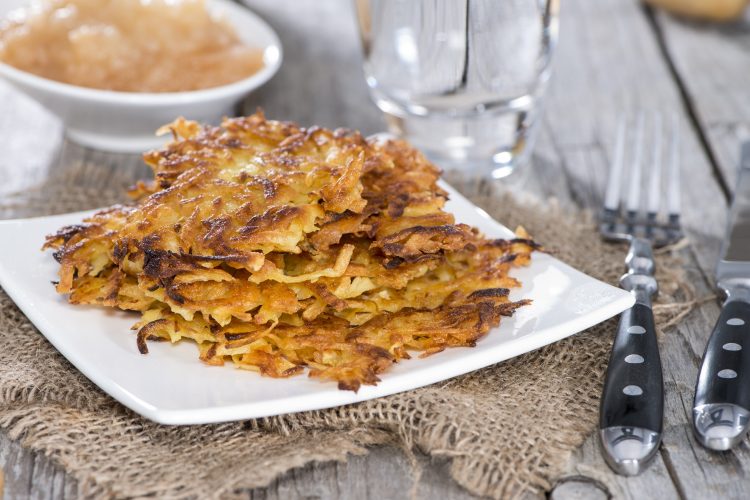 Hanukkah is the Jewish Festival of Light, celebrating the restoration of the Temple in Jerusalem in the 2nd century bce. In restoring the Temple, enough holy oil was found to burn for one night, but it lasted for eight! Ever since, Jews have remembered this miracle by burning candles and enjoying foods cooked in oil during the eight nights of Hanukkah (donuts, anyone?).

The best-known Hanukkah food is potato pancakes, called latkes. My mother made her latkes with unpeeled potatoes, saving a lot of time and effort in the preparation. Running the potatoes through the rinse cycle in an empty dishwasher is an easy and lazy way to scrub them clean. To keep the cut potatoes from turning brown, place them in a bowl of cold water immediately after shredding. The water will turn brown, but the potatoes will not.

Grate potatoes and place in a bowl of cold water. Grate onion and set aside. With a slotted spoon, scoop grated potato onto a clean lint-free dishtowel, and set water aside. Add onion to potato, twist up the towel, and squeeze as hard as you can to remove as much liquid as possible. Set aside. Carefully pour out reserved water, saving the white potato starch that has gathered at the bottom of the bowl. There will be small amount of liquid with the starch. Beat the egg into the starch, then add the potatoes and onion. Mix well. Sprinkle flour, salt, & pepper over potatoes, and stir gently but thoroughly until well mixed.

Place a heavy skillet or Dutch oven over medium high heat, and add ¼ inch oil. Heat until a small piece of potato sizzles, about two minutes. Drop heaping tablespoons of the potato mixture in the pan and flatten them with the spoon, leaving space between. Cook about 5 minutes until golden brown on the bottom, then carefully turn them over. Cook another 4 minutes. Drain on paper towels. Repeat with remaining potato mixture, spooning up from the bottom of the bowl to incorporate the eggy liquid, which will settle. If you need to add oil to the skillet, pour it in between batches, and let it heat for about a minute before adding more batter.

* Makes about 18 latkes. Smaller latkes will be crispier, while larger ones will be crispy on the outside and soft on the inside. Which is better? It’s a matter of taste!

Serve with applesauce, sour cream, or the gravy from Grammy’s brisket!

* May be made ahead of meal – cool completely, then freeze in a zipper bag between layers of waxed paper. Reheat from frozen on a foil-lined cookie sheet in a 350° oven for about 15 minutes.