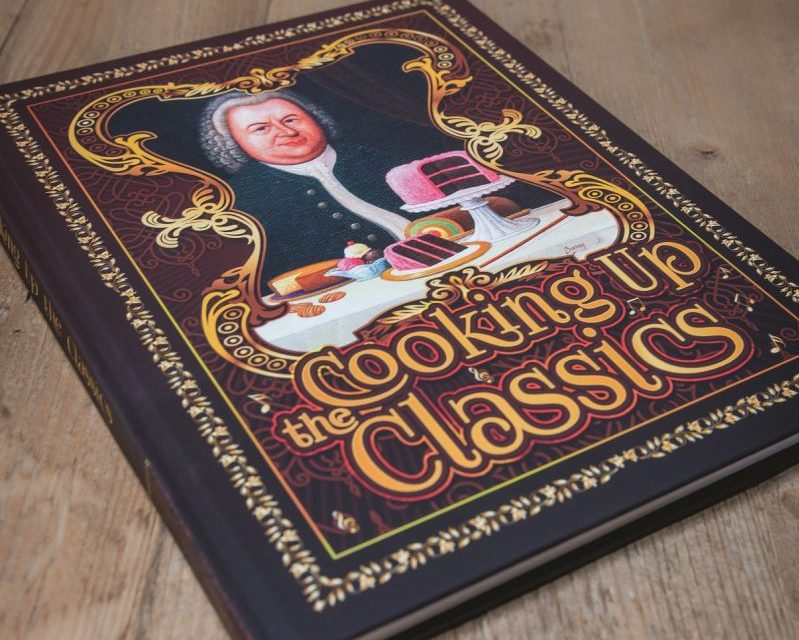 Cooked Up by Manchester Music Festival

Cooking Up the Classics is a unique cookbook involving collaboration between chefs at local restaurants, community volunteers, and Manchester Music Festival. Culinary works of art are paired with fun and curious stories of renowned composers as well as more contemporary rock musicians – from Mozart to Mick.

Excerpts From Cooking Up The Classics

“Together, we hope this compilation of culinary masterpieces and musical masters will help fill your kitchen with the wonderful harmony of food and fellowship.”

The Rolling Stones changed the pop world of music with their innovative hard rock. The Stones created a new sound. They mixed rhythm and blues with rock’n’roll. They played guitars, tribal drums, and harmonicas in a wild mix of musical color. Their music screamed and ranted. But their food favorites are anything but innovative. Mick Jagger, their famous leader, loves mashed potatoes. His mashed potato recipe is very heavy on the butter! All of the Rolling Stones love the recipe. Mick made the potatoes whenever they were on the road and had a stove to use. “How did they stay so thin?” (Some of the answers are very well known.) The serving directions read for this caloric feast: “On each plate, serve a mound of creamy mashed potatoes ringed by heated canned baked beans. Over the top of all this, slice up the frankfurters in good-sized chunks.” This is not – repeat, not – a recipe for calorie counters.” Singers & Swingers in the Kitchen, Roberta Ashley (Parallax Publishing Co: New York, 1967)

Peel and dice potatoes, making sure all are relatively the same size. Place in large saucepan. Add salt and cover with water. Bring to boil over medium-high heat and then reduce heat to maintain rolling boil. Cook until potatoes fall apart when poked with fork.

Heat cream in medium saucepan over medium heat until simmering. Remove from heat and set aside.

Remove potatoes from heat and drain off water. Mash and add hot cream, butter, and smoked cheddar. Stir to combine. Let stand for 5 minutes so mixture thickens and then serve. Serves 6.

Wolfgang Amadeus Mozart wrote many letters to his father and mother as he travelled across Europe as a young composer and later in life to Constanza, his wife, telling of the meals he enjoyed in the homes of his hosts, in the courts of his royal employers, and in the restaurants of Europe. But he was always thrilled to come home to Vienna. As Joseph Wechsberg wrote; “…Vienna has been endowed with its love of bread and pastries for over 500 years. Five years before Columbus discovered America, an anonymous Viennese baker invented the Kaisersemmel (the Emperor’s roll), known in less civilized places as the “Vienna roll”…Vienna’s Lebselter (gingerbread makers)…had their own guild in 1661…” There were “…chocolate makers, marzipan makers, cake bakers and candymakers. As for producers of bread, they were divided in to ordinary breadmakers, Semmel roll bakers and “luxury bakers. “…Vienna’s pastry lore is as rich as the city’s musical tradition… Three hundred years ago, an anonymous Viennese cook scooped the cream off the milk and carefully whipped it into Schlagobers—whipped cream. In Vienna, whipped cream is not only used in countless pastries and on top of many Torten (flat, round cakes), but sugared whipped cream is served as a dish by itself…” “The Cooking of Vienna’s Empire,” Joseph Wechsberg, Foods of the World Series (Time-Life Books: New York, 1968)

Chill for at least two hours before serving. Serves 8-10.