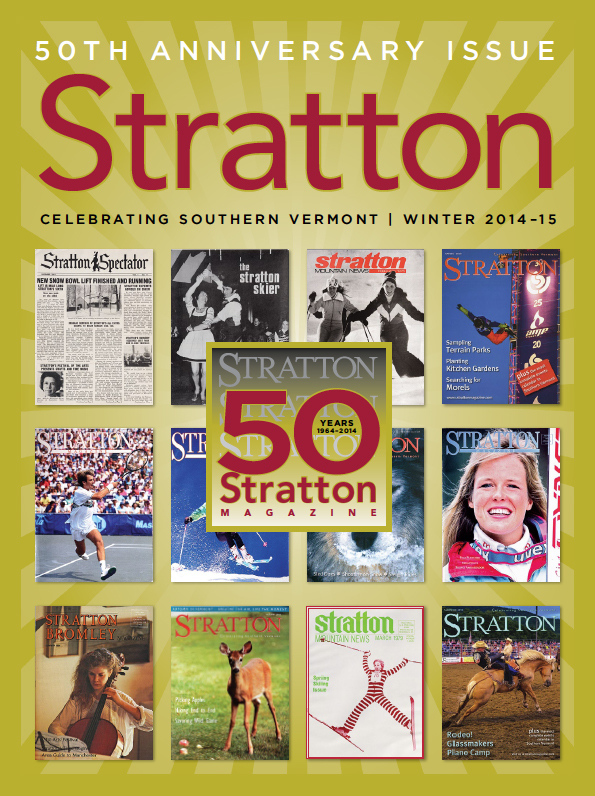 Stratton Magazine turns 50 this year, and it hardly seems possible.

The magazine started as a four- page tabloid, mostly type, with a few images, all of them black and white. The focus in the first few years was solely on the mountain and the resort and the dynamic culture of downhill skiing. In those days, skiing wasn’t widely popular as it is today. There was still something remotely exotic about it and for the people who skied and were passionate about it, was more than sport. It was a way of life.

Those were some heady times. That’s the way it is when you are young.

As the mountain grew, and matured, so did the magazine. Eventually, a time came when it looked beyond the mountain and began to take in a region that is hard to define with a mapmaker’s precision. But we know it when we see it. Think north of Ben- nington, south of Rutland, west of Brattleboro, and east of the New York line. Think Manchester and Dorset. Newfane and Jamaica. Londonderry and Landgrove. Bondville and Weston. Arlington and Shaftsbury.

This would be our turf.

The vision for this expansion came from Lee Romano who was in the advertising sales and management end of the magazine’s operations and as his role with the magazine began to expand into the publishing sphere, so did the magazine’s scope.

Romano became publisher in the early 80’s and he is publisher, still. Though this title seems like a meager sort of job description given all that he does—and has done—to make the magazine what it is. Having been present virtually from the beginning—1977, to be precise—Romano sees better than anyone what has changed and what has not. “We look a lot different now,” he says. “That’s obvious. When we started, the magazine looked a lot like a newsletter. Read like one, too.

“Then, in the early 80’s, we had to make some decisions. Those were challenging economic times and I thought that if we were going to survive and grow, the best way would be to decrease our publishing frequen- cy and expand our reach. We went from a monthly to a quarterly, which was consistent with the theme of this being a four-season resort area. But, then, as we expanded our reach, the magazine grew in size, as well. We added more color. And coated stock. We went from staples to perfect bound. All of those things that made the magazine more physically imposing.

“But, you know,” he says, “the spirit of the thing isn’t all that different. Maybe not different at all. We still are all about a special place and the people here and a way of living and looking at life. We’ve always done that. And we still do.”

That gets us to content. The pictures and the words. This is the domain of what is often grandly called, in the magazine business, “the creative team.” In the case of Stratton Magazine, it is a small unit consisting of an editor, an art director and a photographer. With generous outside assistance from the publisher.

When the magazine was beginning to stand up and take big steps on the road to what it has become, Craig Woods took over as editor. Craig had some experience as an editor and writer with national publications and book publishers. He had ideas about making Stratton Magazine into “something more” and was still working at it when he died, sadly, at the much-too-young age of 40.

He was followed by someone who also had experience with national publications, to include Forbes, Esquire and the National Lampoon, and who had moved here to raise a family. Under Marsha Norman’s editorship, the magazine became what it is and continues to be: a regional that can run with the nationals in terms of quality and spirit.

The two fundamental challenges facing the editor of any magazine are: what stories do we publish and who do we get to write and photograph them? The particular chal- lenge for the editors of specialty magazines is finding ways to avoid publishing the same stories, over and over.

“I was worried when I first took over,” Marsha says. “I was thinking, ‘This is a small area and after a while, you will have done everything there is to do.’

“Well, not at all. You wouldn’t believe the number of interesting things—and interesting people—around here that you can do stories about. In 25 years, we’ve hardly ever covered the same ground twice. And when we do, it is something like foliage. But, then, if you are a regional magazine, located in the Green Mountains of Vermont, you will inevitably do that one again and again.

“But otherwise, there always seems to be some new surprise. Something I didn’t know about, even as long as I’ve lived here. There are stories all around and no shortage of people who are willing to supply me with advice on where to find them. It is altogether routine for me to be cruising the aisles at the grocery store and run into somebody I know who will say, ‘You know, you need to run a story about …’”

And the people to write those stories?

“Well, that’s not quite so easy. But it isn’t like it would be for a lot of regionals. We live in a place where there are a lot of writers and what I think of as exceedingly literate people who don’t know they are writers. Part of my job—and a very satisfying part—is nudging those people along and helping them discover that they are writers.”

These writers, then, supply the words. But a magazine is words and, also, images, and the stunning photographs that readers have come to expect from Stratton Magazine are the work of Hubert Schreibl, who has been with the magazine, and the mountain, from the beginning and is, quite simply, a world class photographer. Hubert is a man of the mountains. Originally the Alps (he is Austrian, by birth and accent), later the Himalayas where he climbed extensively, and now the Green Mountains of Vermont, for which he feels a boundless affection and never tires of shooting.

The words and the pictures require a third element to make them strikingly publishable. This is called “design” in the trade and is the responsibility of the art director who, for the last 15 years, has been Heidi Humphrey. She works with Hubert and Marsha to make the pieces fit harmoniously and with Lee to bring the ad pages into the mix and to make it all flow.

Heidi and Lee have been working on a redesign of the magazine to make it more visually appealing and also give it a look that works seamlessly in digital formats. This is what art directors do and she does it well. The evidence is in your hands.

The team—Lee, Marsha, Hubert, and Heidi—has been working together for a long time now and does it almost entirely without friction, a rare thing in the world of magazine publishing.

“That,” Lee says, “is because we work remotely. Heidi is in Shaftsbury. Hubert is up on the mountain. Marsha and I are down here in the valley. We all work out of home offices and we stay in touch by phone, text and email.”

“That’s true,” Marsha says, “We never even sit in the same room together except during story meetings when we plan the next issue that will appear 12 months from now.

That is the way it is done in quarterlies. You work in season, one year ahead. So Hubert can shoot the story. If we planned the winter issue in June, we would be seriously short of snow.”

So enjoy the 50th anniversary issue of Stratton Magazine. As for us … we’re already at work on the 51st.