How a small group of volunteers are bridging the gap between a long-held dream and its reality.

There is a new sense of optimism these days among a core group of volunteers at the Manchester Riverwalk. Founded in 2013, the Manchester Riverwalk Committee was the result of a state-funded 2013 town planning effort, Manchester 2020 Vision. It was there, in the cafeteria on the Burr and Burton campus, that more than three hundred community members, businesses and organizations came together to discuss the future of the town and ways to improve its livability and viability. After much discussion and debate, four community development projects were chosen by the town as priorities, the Riverwalk being one of them. 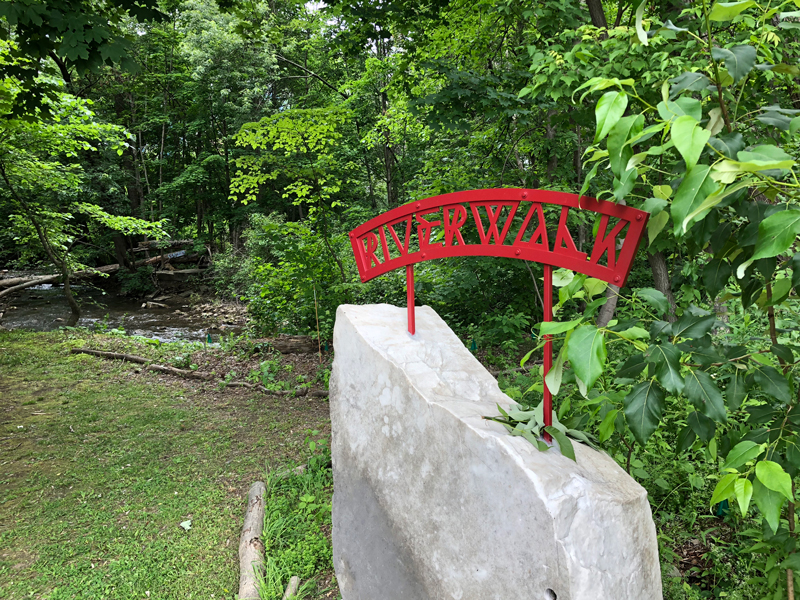 Entrance by Friends of the Sun, sign by Sam Mosheim

Like-minded town folk who had a dream of creating public pathways along the Battenkill started meeting after work in local offices, the B.B.A. library, and the V.F.W. Hall. The informal gathering of a dozen or so people soon grew. They formed a 501(c)3 non-profit, developed a mission statement, and identified subcommittees. Their objective: “to build, beautify and maintain public pathways along the West Branch of the Battenkill, enhancing vibrancy in the community, while creating a compelling recreational and cultural destination.” 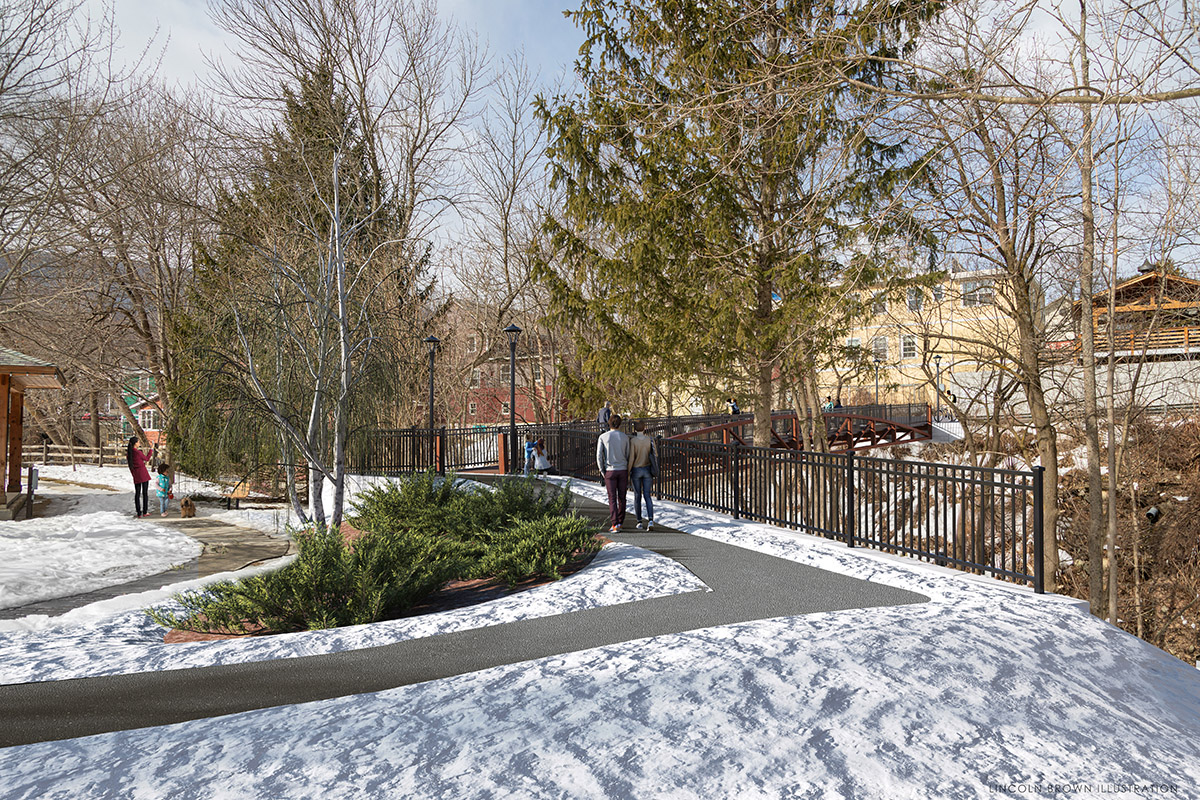 This is the story of all their hard work, and how that goal nearly didn’t happen. That is – until now. Their vision, in its infancy, included a comprehensive plan of trails along the river, elevated platforms, stone steps and two bridges, making the existing paths and views of the river and waterfall more accessible to all. A small amphitheater was also part of the idea, a place for people to gather to listen to music and enjoy the arts outside, close to downtown but tucked away by the banks of the river.

Funds were raised and the committee hired LandWorks, a specialized design consulting firm out of Middlebury, who prepared drawings and put the vision onto paper. Discussions with adjacent landowners including Crosspoints, owner of a large parcel on which the Manchester Shopping Center sits, were held. As the ideas grew, so did the need for additional expertise and funding. Fast forward a few years and the committee was fortunate to obtain the services of several University of Vermont graduate engineering students as part of their Capstone project. These students designed various alternatives for a lower pedestrian bridge, and presented their recommended findings to the Committee.

Timber & Stone, landscape architects out of East Montpelier, were also hired to come up with trail designs that would incorporate both safety and sustainability, while falling within the confines of permitting requirements outlined by a number of state agencies. With detailed plans of bridges and trail options in front of them, it soon became apparent that additional engineering work would be required for any prospective bridgework to begin, so additional specialized consultants were brought onboard. The bank on the north side of the river was prepped and permits were reviewed. Some generous folks stepped forward to donate their time and services, but it was fairly obvious to all that much more money would need to be raised. The Riverwalk held fundraisers and hosted events at a local art gallery, Helmholz Fine Art. Grants were written, cards mailed, and donation boxes set up in local stores. As a way to bring the community together and show off the Riverwalk, locals and visitors were invited to free picnics and harvest celebrations, with live music and games for the kids. 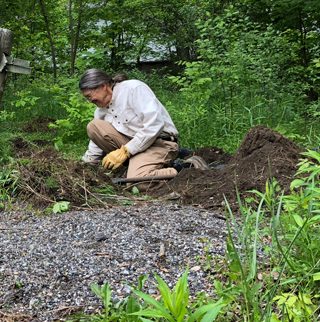 Historical talks were also held, highlighting the textile, marble mills and gristmill of the 1800s located in this area, many of which drew their power from the Battenkill. The Committee was fortunate to obtain the old turbine from one of the last marble mills in Manchester, and with help from locals, proudly sited it along the path 200 feet from its original location. Grants from the Vermont Conservation Commission helped to pay for two interpretive panels, and the town helped with their installations at the Factory Point Town Green and by the turbine.

Another major goal of the group during this time was to also raise awareness of the ecological importance of the Riverwalk area. Regular town-wide clean up days were held to pick up trash and remove debris from the existing paths. After many years of hard work by committed volunteers, the river and surrounding area were now cleaner. Graffiti had been washed off. Invasive plants were removed and native species were planted, with expert advice from a National Parks Service advisor,
Jennifer Waite, and well-known ecologist, Russ Cohen. Funds from the local Lions Club and a grant from the Fields Pond Foundation helped with this Eco-restoration.

Yet with all this progress and enthusiasm, the Committee had hit a wall. One of the most challenging characteristics of the project was that unlike other pedestrian riverwalks in other communities, the Manchester Riverwalk does not own any of the parcels of land over which their project has been designed. While permission to use had been requested and obtained by abutting owners, specific parcels, over which the trails run, included those with existing Act 250 permits. Act 250, a land use and development law born out of concerns in the 1970s of potential overdevelopment in the state, requires numerous stakeholders, agencies and municipalities to participate in, what is at times, a contentious, lengthy, and costly review. Frequently, these reviews result in very strict permitting conditions, if and when the permits are issued. To work on any property with an existing Act 250 permit often requires re-opening up the development review process any time the owner wishes to perform modifications to the property. Therein lies the problem the Riverwalk faced: their site plan runs across not one, but two properties with existing Act 250 permits.

To call this obstacle “complicated” would be a gross understatement. 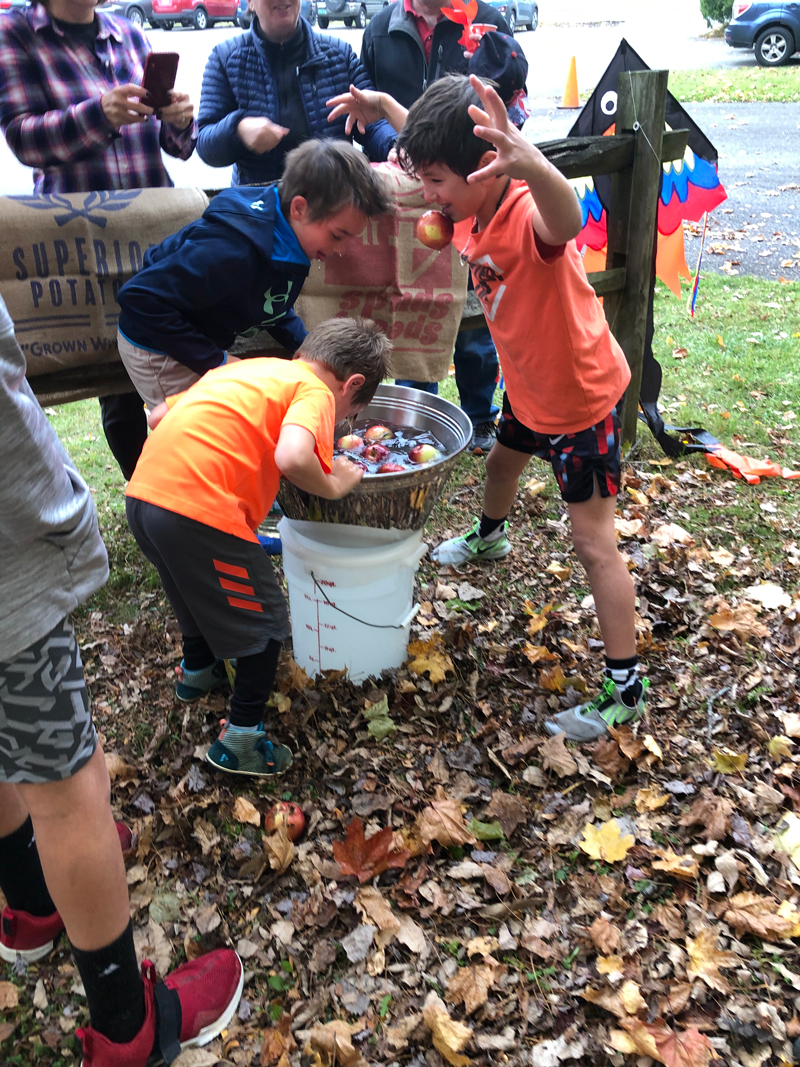 “Years of site plans, expert consultations, hours of volunteer labor and financial resources had been expended to get us to this point,” said board member Stephen Drunsic. “We had hired professionals to review any potential wetlands boundaries, and delineations were created around the proposed location for a lower bridge. The outlook was positive.” But then a letter arrived to the board. The request to construct a lower pedestrian bridge was denied by the Agency of Natural Resources as that bridge fell on an Act 250 encumbered property.

Additionally, as it related to any planned work to improve the existing trails – which have predated many of Vermont’s current regulatory laws – or install boardwalks or perform restorative work, the State of Vermont Fish and Wildlife Department had recommended a series of actions. Those actions, which would have required that no work be performed inside of a 50-foot zone of the river, in effect, stopped them dead in their tracks. All of the current trails are within that zone.

So where does that leave the Riverwalk? One idea is to continue to work with the state agencies, such as the Agency of Natural Resources, and provide them with additional information on how the Riverwalk’s proposed pathways will help improve the fish habitat by decreasing erosion. (By replacing the non-native knotweed and honeysuckle along the riverbank with native plants, the riparian buffer has already been improved!)

“The challenge for us is to find a way to accommodate the state agencies while fulfilling our promise to the community to create the Riverwalk,” explains Margaret Donovan, Board President. “While we work on this, we will also be focusing on the upper bridge, the other main design feature of our plan.”

This upper bridge would land on town property on one side and non-Act 250 property on the other. It would be of sufficient height and distance away from the river corridor. It would be pedestrian friendly, ADA compliant, and offer accessibility to all for the waterfall views at Mill Pond. The bridge plans, drafted by VHB, an engineering firm out of Burlington, spans 110 feet over the river, connecting the Factory Point Town Green with the Main Street historic district. The Riverwalk has partnered with the town of Manchester to coordinate the permitting required and is on their way to raising funds for the bridge, having completed a crowdsourcing fundraiser this past fall.

“We have a ways to go still, and more funds are needed, but we are confident this part of our long-term vision will finally reach fruition,” says Margaret. “It has been a dream of many in the community for years to have an accessible pedestrian bridge over this part of the river. And with the continued support of the community, we hope to break ground this coming year.”