Merck Forest is on a mission to inspire curiosity, love, and responsibility toward our natural and working lands.

One sunny day I stood on a low, wide-open ridge about a hundred yards above a graying bank barn that was built by farmer Joseph B. Harwood in 1852 in Rupert, Vermont. I was at Merck Forest & Farmland Center with Rob Terry, who, for the past two years, has been the nonprofit organization’s executive director. I had gone there to personally meet the farm’s flock of long-wool Romneys, and to buy a few skeins of lovely, brown-sheep colored yarn spun from the fleeces sheared last spring. But I also went there to take in Merck Forest’s famous panoramic views of fall foliage, so I walked with Rob from the lower sheep pasture to higher ground. The 100-mile sightline to the west from Merck Forest across to the ridgeline of the Adirondacks in New York is a wave of reds, oranges, and yellows contrasted against the surrounding deep, dark evergreens. 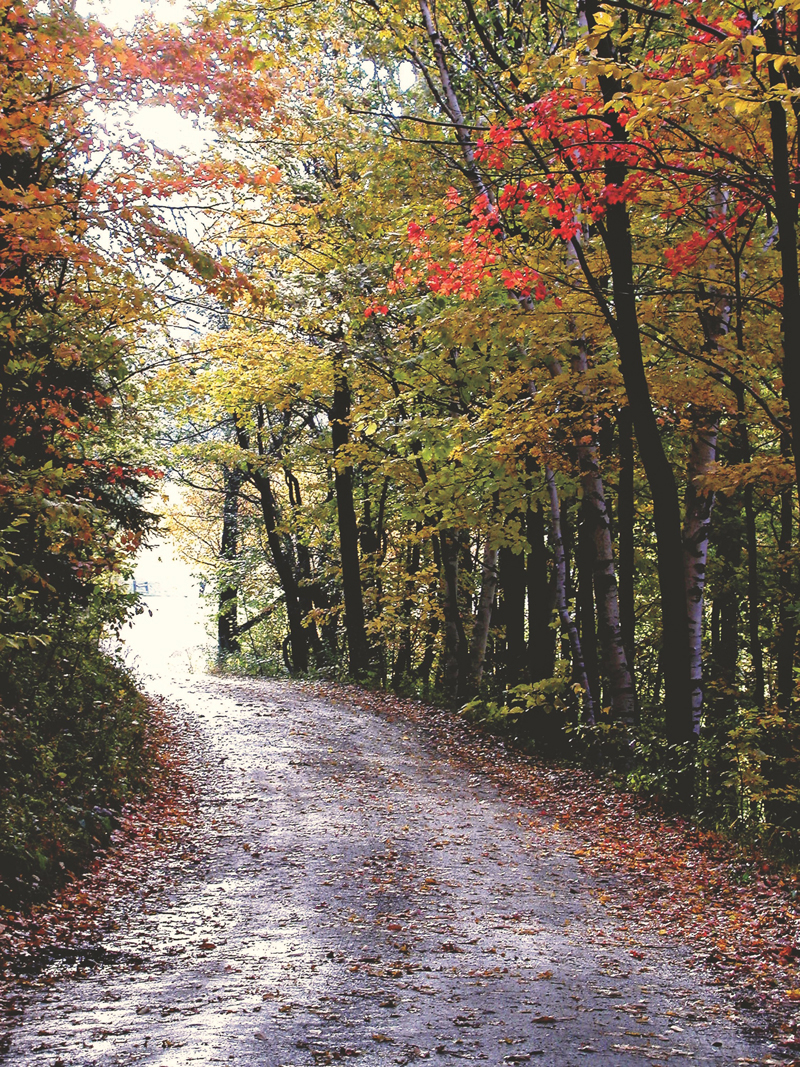 Merck Forest & Farmland Center is a nature conservancy that was created 70 years ago by New York–born George W. Merck (1894–1957), former president of Merck & Company, Inc. George and his wife Serena gifted 2,600 acres, mainly old farmsteads that they had bought and owned during the 1940s. The foundation that the Mercks established was the first environmentally-focused nonprofit educational center in the state. Originally known as the Vermont Forest and Farmland Foundation, it was renamed Merck Forest & Farmland Center after Merck’s death; it has never had any affiliation with the pharmaceutical company that he headed for 25 years. 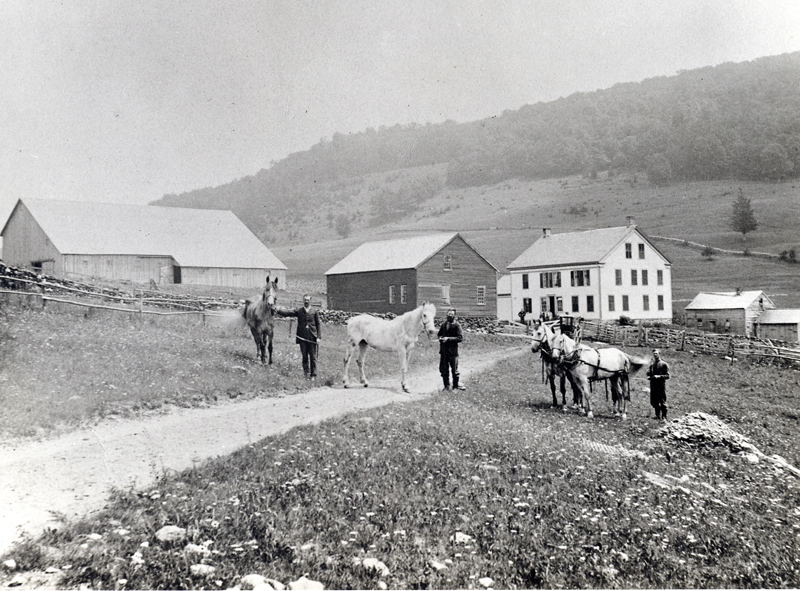 The pebbled path beneath the tread of my Timberlands where I stood on that hillside that day is part of a huge parcel managed by Merck Forest’s 10 full-time staff members. It is a five-square-mile property, which in turn, lies within a vast 67-square-mile expanse of unfragmented forest in this part of the state. Pointing at the nearby clearings and, then to the mountains beyond, Rob said, “Everything we do with the land that we manage here has an impact on all of that, too. But it’s much more. We can have an effect on what’s happening ecologically throughout what is known as the Northern Taconic Mountain Forest Block.” He calls it “a green ocean.” The “green ocean” seen on the map, and even better in satellite images, is a woodland zone that stretches from Rupert at the northernmost point to Arlington at the southern tip, and spreads from Sandgate to Manchester at points east and west. Because it is land that is purposely preserved to be sustainably managed, community supported, and available to the public all year long, visitors, especially children, gradually acquire a new lens while at Merck Forest with which to see the whole of the natural world. “They come to feel at home in our landscape,” says Rob. “Every step along a trail, every night in one of our cabins, lean-tos, or tent sites teaches visitors about something that is unique to this place.” Not coincidentally, there’s a reason why George W. Merck was a champion of teaching people about nature conservation. He was a cousin of Carl A. Schenck, a German-born immigrant who established the first practical forestry school in America at George W. Vanderbilt’s Biltmore estate in Asheville,North Carolina. George had spent time in Vanderbilt’s mountainous 125,000-acre tract with Dr. Schenck, who may have sparked George’s interest in woodland preservation and management.

Visiting Merck Forest, you are guaranteed to find a bit of Walden-like solitude by the reproduction of Henry David Thoreau’s “hut” at Rasey Pond, or a tranquil moment of “stopping by woods” à la Robert Frost, or some unfenced, unstructured free time out of doors that will unplug your toddlers and teens from cartoons and video games. You may be there searching for a secretive blue-speckled Jefferson salamander, or perhaps camping for a long weekend in expectation of hearing the song of a chestnut-sided warbler, or possibly trying to squeeze all your children into the hollow of an ancient red oak tree, just for the fun of it. 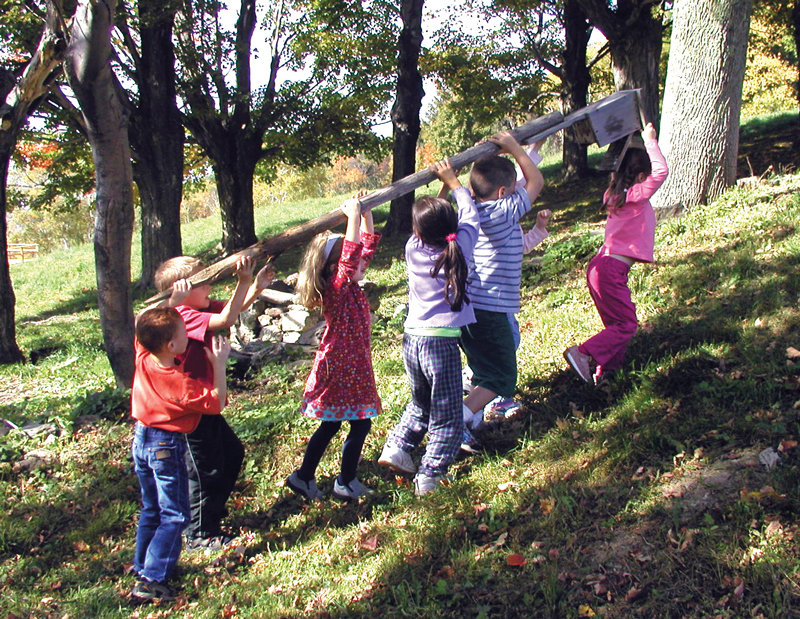 Each year, thousands of visitors head to Merck Forest to bird watch, hike, camp, play, learn, and explore, but, for generations before them—before us— this was some of hardest worked land in the nation. Looking at the rolling, forested hills surrounding the old Harwood barn, it is hard to envision that almost all of the acreage inside Merck Forest’s boundaries was once farmland. Although some was woodlot, for more than a century the land was 60 percent cleared, and, for a while, notably fruitful. The six family farms that occupied what is now the Merck Forest preserve, tallied together for the year 1870, marketed a ton of butter from a hundred cows, more than eight tons of cheese from several hundred sheep, plus astounding quantities of hay, potatoes, corn, oats, and other grains. That year, they also produced and sold a half-ton of maple syrup. Over time, some of the farmers sold out to their neighbors. Except for the 60 acres maintained as farmland now, the former hayfields and sheep pastures have naturally reforested.

The delightful discovery about Merck Forest is that because of the staff’s ambitious lineup of events, programs, workshops, plus daily access, the site offers many different experiences to different people throughout all four seasons. For some, Merck Forest just means pancakes. Every year, in late March, several hundred people drive the half-mile through the woods off VT Route 315 up to Merck Forest to eat pancakes, served with maple syrup boiled off from the sap of the sugarbush a few yards away from the table where the people eat their breakfast. It’s quite the party, and the showstopper is always the enormous evaporator in the Frank Hatch Sap House where the organic sweetness is made.

Dawn to dusk, there are schoolchildren, youth groups, families, and would-be farmers who come to Merck Forest to spend the day in the farmyard with the draft horses, the piglets, the lambs, and the chicks, chickens, and that one very bossy rooster. Still others join after-dark guided walks along the shadowy fringes of the tree line to whisper to each other while spotting owls. Equestrians come to Merck Forest to ride along open paths marked on the map as “roads,” which is what those paths were long ago. As soon as trout fishing season opens in April, those with fly rods and waders come to hook a few native brook trout at White Creek. During each of Vermont’s designated seasons for black bear, deer, turkey, squirrel, rabbit, and coyote, hunters can access Merck Forest’s backwoods, too. They are directed, with permits, to a reserved 2,000-acre tract. 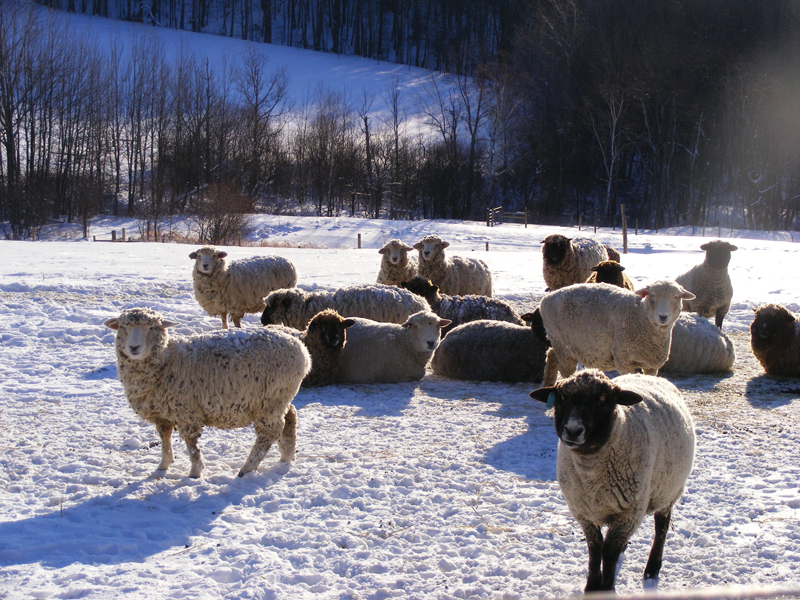 This past July, during what may become an annual outing, dozens of volunteers of all ages gathered with binoculars around their necks and field guides in their pockets to count things—these citizen scientists participated in a one-day bio-blitz to record visible species of flora and fauna throughout the fields and woods. Mid-summer, people head to Merck Forest to pick blueberries or apples. Every autumn, some are lured to Merck Forest to be fully immersed in Vermont’s unparalleled fall color. The fields and trails are open to visitors all winter long, as well, and on those gorgeous blue-sky clear days following new fallen snow, the property is a destination for hale and hardy snowshoers and cross-country skiers.

Isn’t it enough just to say that it is absolutely impossible for anyone to visit Merck Forest & Farmland and find nothing to do? “Everything we do here is to make the forest and farmland a welcoming place to be out of doors,” says Rob. “But, at the same time, this is not overly curated or heavily manicured like a park. The staff and I do farm chores. We tap 3,000 maples throughout more than 35 acres, we herd sheep and pigs from here to there, we clean the coops and muck the stalls, we fix fences, we clear brush, and we log and cut firewood.” They are much more than passive stewards of a pretty landscape—they work this land, and, at the same time, thanks to the forethought and generosity George W. Merck, they get to share all 3,200 acres of it with the rest of the world every day.

Today, in fact, it may be your turn to cuddle the lambs and gather the eggs.

THE FOREST, THE TREES, THE FUTURE 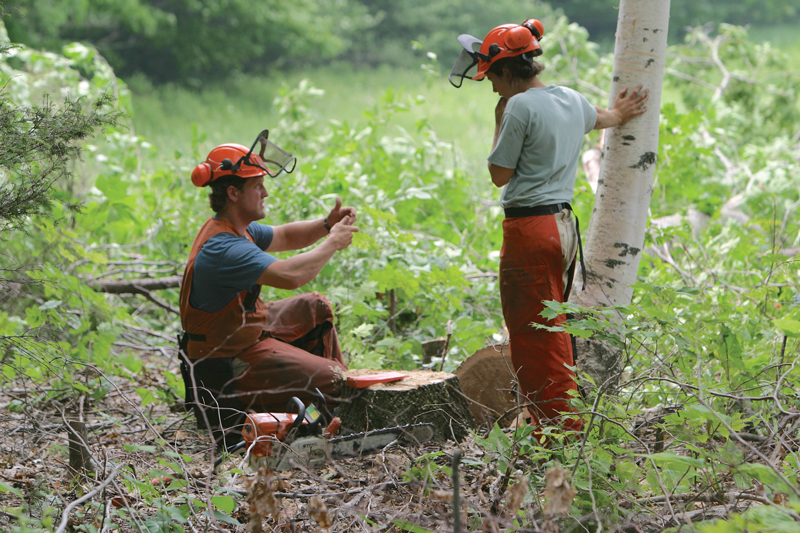 Next year, Merck Forest & Farmland Center will start to focus on a “five-year arc” that will have “a forward-facing, yet commemorative theme,” as described by Liz Ruffa, the new director of Institutional Advancement since January. She says, “From 2020 to 2025, when the site marks its 75th year in operation, we’ll develop an initiative intended to both celebrate past successes and tease out opportunities for future growth potential.” Executive Director Rob Terry adds, “We are already talking about what Merck Forest & Farmland could look like 75 years from now.” Today, about 13 percent of private, non-industry forestland in the country’s northeastern forests is open to the public for recreation. Although that is a larger proportion than in any other area of the United States, the board of directors and staff at Merck Forest are keenly aware of their greater role in sustaining this foremost example of private land use for public benefit. It’s worth asking: nationwide, during the next two generations, will public support of and access to forests grow, or shrink to next to nothing?

Note: Cell service is unreliable in this mountainous area. Plot and print your route to Merck Forest before leaving home, or download for offline use.