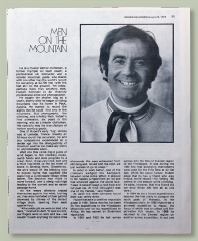 Hubert Schriebl in Men on the Mountain, February 1974

and for Stratton Magazine … the indispensable

Readers of the magazine know Hubert Schriebl as a remarkably gifted photographer, someone with the kind of talent that doesn’t come along very often. Just once, in fact, in the lifetime of this magazine.

Hubert was an instructor at Stratton Mountain before he became the mountain’s staff photographer. Ski instructor and world-class photographer would, you’d think, be enough for most lifetimes. But before he was either of those things, Hubert was a serious, expeditionary mountain climber. A native of Austria, he learned in the Alps where he accomplished—and risked—a lot, then went on several expeditions to the Himalayas where, among several other notable feats, he led the first expedition to North Manasulu. He climbed extensively also in Africa, where he summited Kilimanjaro, among others.

Hubert’s love of the mountains—of the world’s beauty in general—is on display in our pages, every issue. And he always aims high.