Robert DuGrenier has a rock-solid worldwide reputation made of glass. 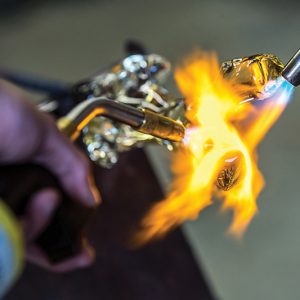 This autumn, tens of thousands of visitors and locals alike will tour the scenic back roads and small towns and villages throughout Vermont to look at millions of trees—the state’s colorful explosion of fall foliage is unarguably world famous. At Southern Vermont Arts Center in Manchester, however, people will have to go indoors to see one particularly rare tree. It’s a yearlong installation in the Elizabeth de C. Wilson Gallery, open six days a week, by donation, by glassmaker and sculptor Robert DuGrenier of Townshend, Vermont. Using the segmented trunk and sawed-off limbs of a tree he had cut down on his property and left on the ground during the winter, DuGrenier reassembled its parts (which had acquired some interesting textural qualities where his sheep had chewed the logs) back into a tree shape. He added clear, hand-blown glass forms along the cut branches where the springtime sap would have bubbled forth. Next, he suspended it all on shackles and chains from the highest beam in the center of the gallery’s three-story, stone staircase. He titled the piece Sap-Link. The most interesting perspective of the work is from the topmost step looking down into it. He says, “It is modular, so it was built on the site. I know the Wilson Gallery’s staircase hall well because I have exhibited my work there many times before, and I conceived of this piece just for that space.” 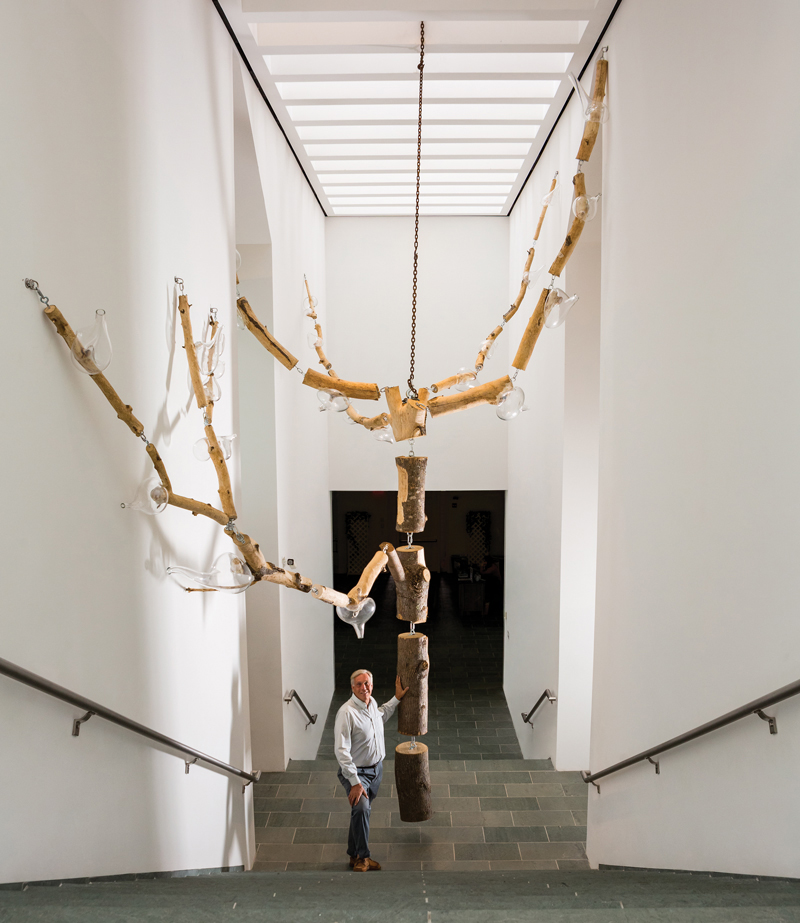 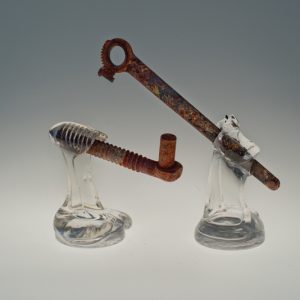 Out of the Ashes Robert DuGrenier Glass Art Gallery & Studio

“The Sap-Link project was transformative for me,” DuGrenier says, “and it has taken me in a new direction. I will be going back to nature for more inspiration, seeking to understand the science of it and finding the beauty there. A theme that has continued throughout my work is time, creating pieces that capture the movement of time, or a moment of time, in nature.” A perennial favorite among SVAC’s exhibiting members, his work ranges from the miniscule (he blows tiny glass shells for hermit crabs) to this—the majestic.

The tree in the SVAC installation was one that was cut down on DuGrenier’s farm, and it is the second chapter of a story about how he can turn “destruction into art.” “I had to take the tree down,” he says, “to build a new barn, and at the time I knew I wanted to use it for a sculpture.” Four years ago this October, his old barn, built in 1810, burned to the ground. After the embers cooled, DuGrenier sifted through the ashes gathering the hundreds of charred bits of all his tools and equipment—hammers, axes, pick heads, wrenches, saws, the blades of shears, pitchfork and rake tines, shovels, hay hooks, chains, gears, spokes, spikes, staples, nails, hinges, even lanterns, and anything metal that had not melted. Although griefstricken, DuGrenier brought the “remains” into his glass studio and, in what he says was therapy, he began to work. The result was a remarkably emotional and evocative body of work. In what he refers to as “controlled drip casting,” DuGrenier semi-encased, mounted, or “froze” the artifacts, one by one, in clear, colorless glass. A portion of the Out of the Ashes series is on exhibition at DuGrenier’s gallery in Townshend. 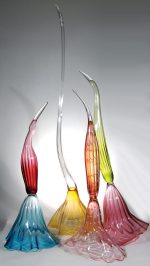 Birds of a Feather Flock Together

Perhaps because, in addition to being an artist, he is also a farmer—tending his crops as well as caring for his livestock daily—so much of what DuGrenier does in glass leans toward the lyrical side of nature, creations that inherently evoke an indoor-outdoor fusion. Some of his newest pieces, like the installation at SVAC, involve trees. Other colorful “flora and fauna” pieces, some of which are eight or nine feet tall, are the most delicate of flower blossoms, enlarged to the scale of how you might see the rippled petals and twisted stems through a gigantic magnifying lens. “Or,” he says, “they could be shrimp, or algae, or jellyfish, or kelp. They are incredibly flowing and natural forms.”

DuGrenier has garnered an international reputation in his craft. At Illinois State University’s College of Fine Arts, he completed an MFA program, and he’s recently been inducted into the school’s Fine Arts Hall of Fame, an A-list of highly accomplished alumni. Before ISU, he studied glassmaking and goldsmithing at Philadelphia College of Art and, later, at Hornsey College of Art in London, England. Hornsey, says one source, “was renowned for its experimental and progressive approach to art and design education.” Perhaps that explains how DuGrenier learned to think the way he does—as if glasswork, in particular, has no limitations whatsoever. 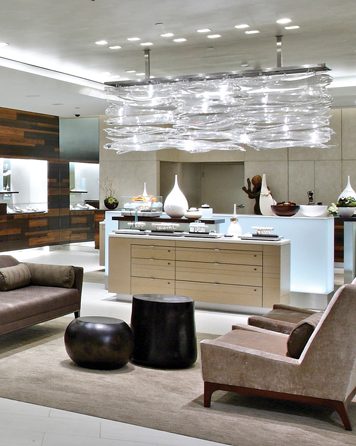 His firm, Robert DuGrenier Associates, has built a client list that substantiates his worldwide fame. Collaborating with architects, artists, product designers, celebrities, corporations, and private individuals, he sustains the impression that grand commissioned works are for the ultra-privileged. For Wolfgang Puck’s London restaurant, Cut, he created an iridescent, multi-panel glass bar. Since 2008 he has worked closely with Tiffany & Co., designing and producing lighting sculptures, glass jewelry displays, and window display components, as well as manufacturing the cast crystal lettering for the Fifth Avenue flagship store in New York City. For the Divan Istanbul Hotel in Istanbul, he created chandeliers, sculptures, and lighting. For the Ritz Hotel in Paris, he designed and made a stunning glass elevator shaft. For Harry Winston’s jewelry stores in the United States and in Japan, he made artistic, nontraditional chandeliers, involving more or less the entire ceiling in one location. For the Hotel Principe di Savoia Milano in Italy, he designed, created, and installed the chandeliers and a glass bar front.

“If you have a specific commission like those, you have a whole list of things that you need to accomplish for the client. Then, I marry my creative ingenuity to that list, and that is where I get so much out of the artistic process,” he says. “I love the types of challenges that involve a large scale, a total environment. It’s a hundred times more difficult.” 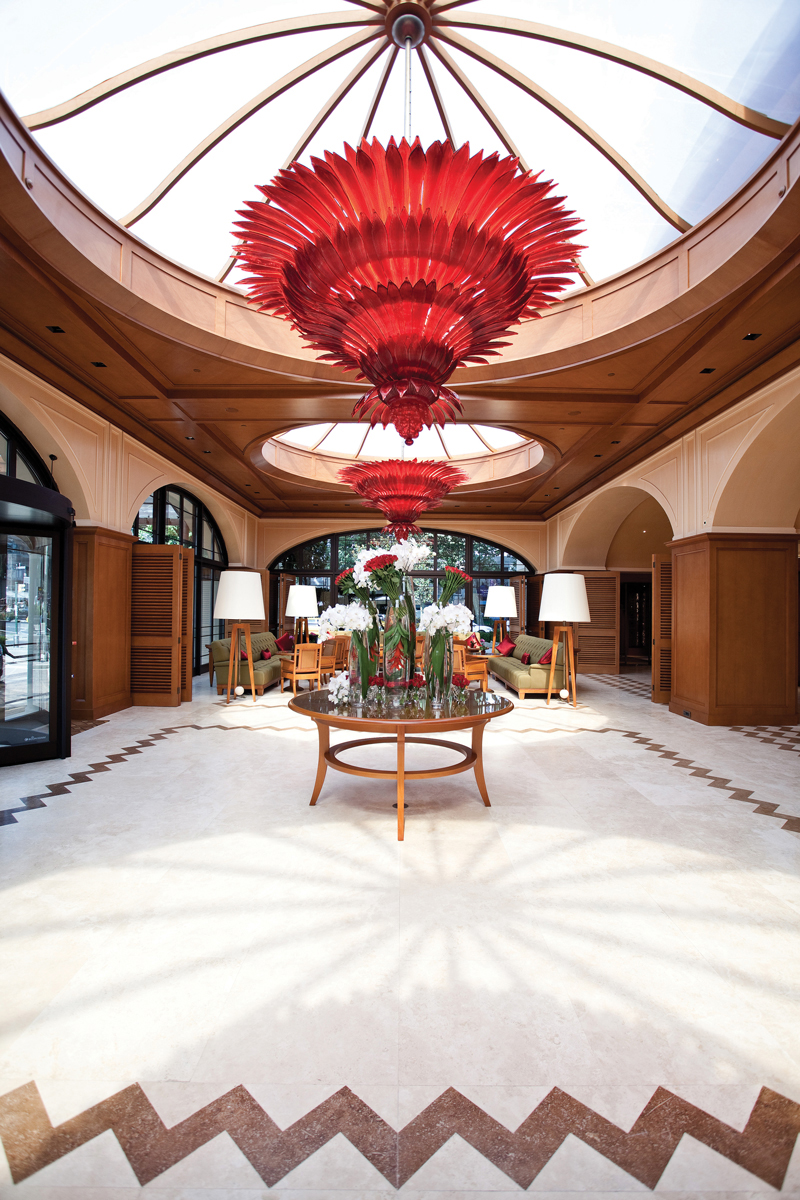 This is not to say he wouldn’t also undertake to create hand-blown, custom pendant lampshades for your kitchen, if asked. If you cannot find the fixture you want, he will make it, and, sometimes, you can even be in his studio to watch your pieces being “born.” The private commissions may be among the most exceptional of all DuGrenier’s work. For Bill and Melinda Gates’ home in Medina, Washington, he designed and fabricated a complicated and magnificent “structure” that is suspended in the high dome of their library. Beneath it lies Gates’ prized $30.8-million Leonardo DaVinci Codex Leicester. DuGrenier crafted a 36-inch clear glass globe with applied ceramic enamel and 22-carat-gold decorations drawn from 15th-century engravings of the constellations. (The engravings were specially printed and purchased from the Louvre in Paris.) DuGrenier’s ethereal orb floats inside a bronze ring, and it is a feat of both engineering and artistic skill. “How does one meld all those diverse elements together with the space, for this type of client, in this beyond-exquisite circular room?” he asks, confident in advance that it could be done. “The globe was next to impossible to blow,” he adds. On Grand Cayman, a private homeowner commissioned DuGrenier to make chandeliers that appear to detonate with light and that are paired with exotic looking illuminated glass “spears” rising up below them, the entire scenario morphing into arresting colors that dramatize the property’s entrance. 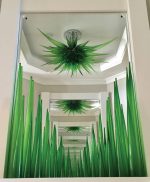 He can think big, very big, but likewise, DuGrenier has long been recognized for the dozens of alluring bottle and package designs he’s done for fragrances and products for Mark Cross, Susan Lucci, Donna Karan, Potentia, Faberge, Nautica, Orvis, and a list of clients too long to list. His trophy designs are among his most imaginative and coveted works, including custom award “statues” he’s created for ESPY, ABC, MTV, HBO, VH1, Spike, and even Nickelodeon (it’s a witty, plump, cast-acrylic blimp).

Visitors to his Townshend studio can see that the way in which DuGrenier handles hot, viscous glass is like a two-millennium flashback to the craftsmen of the earliest years of the Imperium Romanum when blowing puffs of air into globs of melted glass to make a vessel was a new and groundbreaking method. What DuGrenier ultimately makes of air-plus-glass is not archaic—it is most often fantastical and futuristic, and always fascinating. 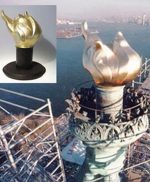 THE DUGRENIER FLAME
Prolific barely defines the abundance of creative work in Robert DuGrenier’s design portfolio of sculpture, metalwork, and glass, so just try to remember this: from now on, when you see any photo, drawing, replica, or video of the colossal Statue of Liberty, or if you are out on Liberty Island in person, you should immediately think of one guy—yes, DuGrenier. Look closely at the flame on Lady Liberty’s torch. For the centennial conservation and rehabilitation project of the monument completed in 1986, DuGrenier was commissioned to produce a 1/12 scale model of a new flame, which was subsequently fabricated by Les Métalliers Champenois based in Reims, France. According to the National Park Service, “The flame and upper portion of the torch had been severely damaged by water and was replaced with an exact replica of Bartholdi’s original torch. The torch was gilded according to Bartholdi’s original plans.”