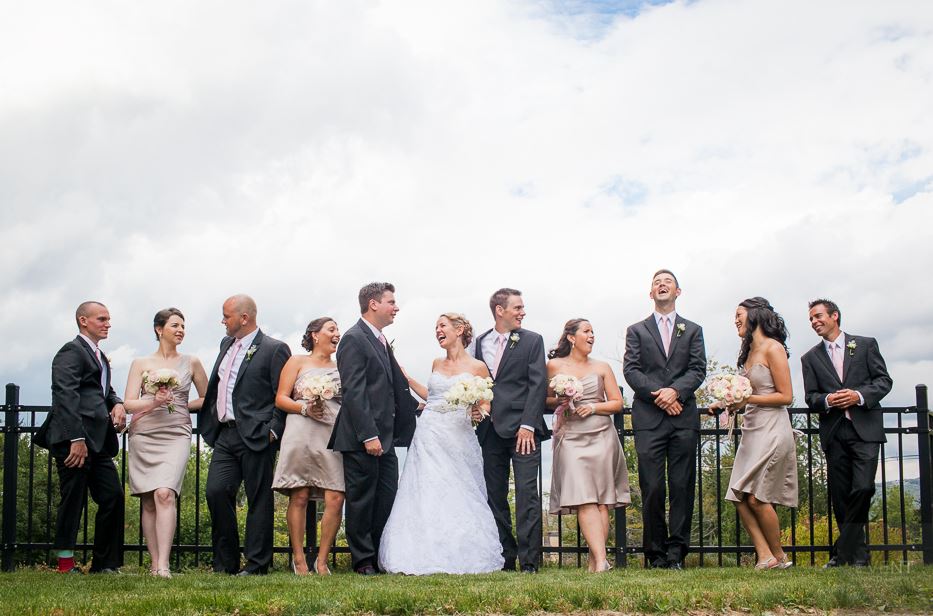 When Nathanial Buell met Laura Bence in January 2012, neither of them knew that the powers of corporate America would bring them together.

At the time, Laura’s company, IBM, had just acquired Nate’s small security software company, which was located near Boston. Shortly after the business deal was settled, the two were asked by their superiors to set a course for Atlanta, Georgia for a joint sales conference. It was a chance to mingle with their new coworkers.

Nate, a marketing manager, met Laura, a finance manager, during an evening at the Atlanta Aquarium that was organized as part of the conference.

“One night the conference rented out the Atlanta Aquarium,” Nate said, “and we introduced ourselves there.”

Both were pursuing their individual careers, but were both also looking for love with someone who was laid back and easy to get along with—the type of girl or guy who could relax on the weekend enjoy a good baseball game or pack up the car and go on an overnight to the mountains.

“Laura and I were always drawn together because we’re easy going people. We don’t get rattled. We can both find a way to have a good time,” Nate said. “Our best weekends are when we have no plans at all and take a trip into the city or a last-minute trip up to Vermont.” He said this easyness makes them “so compatible. We were both just looking to be happy,” he said. “We both like living stress free, and we realized that being together would make that happen.”

“Laura and I were always drawn together because we’re easy going people. We don’t get rattled. We can both find a way to have a good time,” Nate said.

Sensing kindred spirits that night at the aquarium, and not sure when they’d see each other again, the two struck up a long-distance relationship. They dated for a year, calling back and forth from Stamford to Boston and visiting as much as possible, before Laura decided to bridge the gap and move up to Boston. They dated for nearly another year before Nate decided it was time to propose.

“In my head, I thought it would be really nice if I would propose at the Atlanta Aquarium,” Nate said. Thankfully he had a great way to get Laura to Atlanta without her suspecting anything: One of his close friends (and eventual groomsman) lived in Atlanta and it wasn’t out of the ordinary for them to pack a bag or two and take a spontaneous weekend away and visit friends.

“I contacted the aquarium ahead of time,” Nate said, thinking it he could ask some of the staff to help him make the surprise special. It turns out the aquarium was a popular place for proposals and they were ready for him.

“The aquarium people were great. They sent me like a six or seven-page document of all the possibili ties,” he said with a laugh while explaining the myriad of scenarios the aquarium offered to prospective grooms who wanted to ask someone to marry them at the Atlanta Aquarium. “You could have a diver hold up a sign in the (glass observation) tank, you could have dolphins swim up to you . . .”

Message in a Shell

Nate knew that Laura would probably get wise to a grand gesture, so he decided on something a little lower key that she would not suspect so that it would still a surprise. Employing the help of their friends in Atlanta, he set the stage.

“I scheduled a behind- the-scenes tour with a tour guide for Laura and our two friends we were visiting in Atlanta,” he said. At a cer- tain point in the tour, the guide would show the group a collection of shells and ask Laura to open one, which would hold a message.

Laura suspected that there might be proposal when Nate suggested a visit to the aquarium, as the two hadn’t been back to the aquarium since that sales meeting when they first met.

“I definitely knew something was up when he wanted to go the aquarium,” said Laura.

She had no idea how it would play out, however— it was just a hunch. That was, however, until they got to the shell room.

“We walked into the room with the shells, and the guide asked Laura to open this large oyster shell with a note inside that said ‘Will you marry me?’” said Nate. “When she opened it, I got down on one knee be- hind her with the ring.”

After Laura said “yes,” happily engaged, the couple then had to decide on where to host a wedding that would be accessible to friends and family scattered around the country.

Nate had skied at Stratton and thought that the natural beauty of the mountain and surrounding valley would make a great setting, so the couple decided to check it out as a wedding venue.

“We had never been up there together,” Nate said of visiting the mountain for a site visit. “We did a little research online and it seemed to have everything we wanted right in the same spot: The chapel, the village, activities, the condos, the spa . . . People could walk to everything. When we got there we just fell in love with the entire scene—the scenery and everything the mountain entailed.”

Satisfied that Stratton was “the place,” the two set the date for September 6 ceremony at The Chapel of the Snows; reception to follow at the Stratton Mountain Club. They invited 100 guests and started scouting for a local minister to officiate the ceremony.

“The pastor who performed the ceremony was Pastor Gordon McClellan from the First Congregational Church in Manchester,” said Laura. “We met with Gordon face-to-face at his church when we were visiting Stratton for our menu tasting. He told us about himself and about the typical structure of the ceremonies that he had done in the past, but he made it very clear that he was flexible with the format, which we loved.”

”We gave out little bottles of maple syrup as favors. A lot of our friends had never been to vermont and we wanted to make it as ‘vermont’ as possible without going over the top,” said Laura.

“Ultimately, we constructed a wedding outline that Gordon followed to a T, and he even helped decorate the chapel by bringing a couple of crosses from his church for us to use during the ceremony,” said Laura.

Wanting to bring some more local touches from the mountain and valley into their special day, they also decided to incorporate some Vermont accents that would reflect their casual, easy lives and also give their guests a little local taste and flavor through the din- ner menu.

“We had mini corn fritters with Vermont maple mustard dipping sauce, which were a big hit!” said Laura. “We also decided to have doughnuts instead of a traditional wedding cake, so we decided to serve bacon maple-glazed doughnuts. We also gave out little bottles of maple syrup as favors. A lot of our friends had never been to Vermont and we wanted to make it as ‘Vermont’ as possible without going over the top.”

That, of course, also included some local craft brews.

“A lot of my friends appreciate good beer,” said Nate, “and Vermont is obviously a great destination for good beer. Everyone I talked to was very happy with the selection of Vermont beers at the reception.”

In addition to their Vermont accents, the couple provided mini video recorders for guests to capture impromptu moments from the reception—a decision they said captured some of their favorite and funny moments from the day.

“We had four recorders floating around,” Nate said. “Of course we went back and looked at them later and some of the funniest things were people who took selfies when they didn’t mean to, and one of our friends perfected the technique of getting people to pose for a still photograph but shooting a video instead. We got a lot of candid moments like that that we wouldn’t have necessarily gotten with our wedding photographer.”

“We also decided to have doughnuts instead of a traditional wedding cake, so we decided to serve bacon maple-glazed doughnuts,” said Laura.

Nate and Laura’s number one must-have for their wedding day: No wedding drama. No missing cake, no mixups with the waitstaff, no forgetting to turn down the music during the toast, no pulling the bride aside to make last-minute decisions. Both said that they got their wish, even when Laura worried about finding a stylist to do hair and makeup.

She found a hairdresser plus assistant who agreed to come to the mountain and do everyone’s hair. “I could not have been happier with the results!” said Laura. “As I was taking out the 100-plus bobby pins out of my hair that night, and throwing away the extra makeup that she had left me for touch-ups, I realized how lucky I had been to find someone so accommodating.”

“One thing Laura and I constantly talk about is how smoothly and quickly everything went, thanks to the staff at Stratton,” said Nate. “The pressure of getting married of course builds up for so long. It’s one of the biggest moments of your life and you want it to be a storybook wedding.”

The happy ending, the couple said, was that everyone had a great time. The venue gave them a lot of options for entertaining out-of-town guests and they didn’t have to scramble to come up with ways to keep everyone happy throughout the visit.

The happy ending, the couple said, was that everyone had a great time. The venue gave them a lot of options for entertaining out-of-town guests and they didn’t have to scramble to come up with ways to keep everyone happy throughout the visit.

“The girls had their nails done at the spa and the guys played golf the day before. Some people hiked the mountain,” Laura said. “It was a beautiful location.”

“There weren’t a lot of places we could find that had everything so close and where our guests could make a weekend of it,” Nate said, remarking on the natural beauty and convenience of the area. “People were going to have to drive to wherever we had the wedding no matter what, so to take all of those things out of the equation was a huge factor for us.”

Following the wedding and reception, Nate and Laura honeymooned on the south coast of Spain and then in Paris and the Burgundy wine region of France. They are now planning their next moves as a married couple, settling down in Massachusetts, going to Red Sox games and investing in their future.

“We are moving on to the next stage of our lives together,” said Nate. “Our goal is to live stress free and to love and commit to each other.”